A Brief Introduction to Smart Contracts 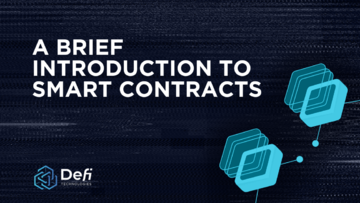 A Brief Introduction to Smart Contracts

Ever imagined a path-breaking tech that has the potential to replace lawyers someday? Yes, we are referring to smart contracts. Contracts came a long way from where they started. The contracts we use today are a result of multiple tweaks to the judicial systems to create something that speaks solely for justice. Things like verbal agreements are no longer enforceable by the law. For a contract to be legally binding, it is supposed to be written on a legal document with attestation of all the parties involved. Considering this evolution, it is only fair to assume that smart contracts could be the next big change in this landscape.

Smart Contracts are one of the most effective use cases of blockchain technology. The primary advantage of the blockchain is to be a decentralized system connecting all authorized participants, thus eliminating the intermediaries. This will potentially save us a lot of time, money, and aggravation. While blockchains are not without flaws, they are indisputably quicker, cheaper, and more secure than conventional centralized systems, which is all the reason why banks and governments are embracing them.

In 1994, Nick Szabo, a legal scholar, and cryptographer saw the potential for smart contracts, also known as self-executing contracts, blockchain contracts, or digital contracts. Contracts of this type may be translated to computer code, saved, and duplicated on the system, and monitored by a network of computers. This would also result in ledger feedback, such as money being transferred and the goods or service being received.

What are Smart Contracts?

A smart contract is a computer protocol that enables, verifies, and enforces the negotiation or execution of the contract, autonomously. Industry and commercial processes are being reshaped by smart contract technology. Because smart contracts are incorporated in blockchains, they allow the contractual provisions of an agreement to be automatically enforced without the involvement of a trusted third party.

Consequently, smart contracts may help decrease administrative and service expenses while also increasing the efficiency of corporate operations by mitigating risk. While the roots of this date back to Nick Szabo in 1994, Ethereum's efforts in this area have made all the difference. We can say that smart contracts have acquired prominence because of their adoption by the Ethereum platform. Numerous projects have been built on the Ethereum platform, enabling anybody to generate their tokens easily.

Smart contracts are quick; they operate instantly and autonomously, with no possibility for a third party to intervene. Experts believe that this tech could eventually replace conventional contracts because of smart contracts' tamper-proof nature, transparency, self-verifying, and enforcing capabilities.

Since smart contracts are an amalgamation of codes, they aren't written in plain English like the conventional ones. Therefore, it is a bit difficult to comprehend them without having a fair understanding of how they operate. Let's discuss that now.

Consider the simple to get a better understanding of how smart contracts work. Assume Tim wants to purchase Amy's apartment, and they prefer using smart contracts to get into an agreement. To make this agreement, they create a smart contract on the Ethereum blockchain. A simple version of this smart contract could read as follows: "WHEN Tim pays Amy 0.75 Bitcoin, THEN Tim will acquire ownership of the apartment." Once this smart contract is created, altering it is impossible, and Tim can confidently pay the funds without any trust issues.

In a typical situation like this, Tim and Amy would be required to pay a slew of fees to intermediaries such as the bank, a lawyer, a real estate broker, etc. But with the involvement of smart contracts, there are no longer any commissions or delays associated with the process. Most significantly, both parties have avoided the most tedious paperwork.

Step1: The first step is to establish the terms between the parties coming into the contract. After the contractual conditions are agreed upon by the parties involved, they are converted into computer code. The code would contain several distinct conditional statements that depict the different outcomes of this transaction in the future.

Step 2: When this code is generated, it would be saved in the Blockchain network and copied among the members involved in the contract.

Step 3: The corresponding transaction is performed only if a particular contract term is fulfilled and confirmed by all the contract participants. Once confirmed, the code is then executed on all machines connected to the network.

The benefits of smart contracts go beyond minimizing paperwork involved in financial transactions. Among a plethora of its applications, a few notable ones have been discussed below.

Insurance Industry - Each year, the insurance industry spends millions of dollars on claim processing. For a claim to be processed, the insurance companies investigate the cause thoroughly, which is expensive and time-consuming. By incorporating smart contracts into this, we can reduce the expenses and processing time greatly. There would not be a lot left for investigation as most of it would be precoded, and the contract gets executed instantly depending on the input given.

Elections - By incorporating smart contracts into elections, we can increase transparency, save expenses, and mitigate fraud like rigging or hacking. For example, once a vote transaction has been recorded on the blockchain, it becomes immutable.

Health-related data - Consider not having to complete tiresome paperwork before a hospital check-in. Incorporating smart contracts could make this a reality since they would remove the need for this paperwork. Additionally, they guarantee that personal information is not vulnerable or misused.

Management of Businesses - These contracts help the firms to automate processes and fine-tune computations. This would enable them to reduce labor hours and expenses.

Smart contracts do have the potential to displace most of the expensive intermediaries. Additionally, we also saw the benefits of smart contracts in other domains in the applications mentioned above. Thus, if smart contracts serve their intended function, we may one day live in a world devoid of third parties. This would result in significantly increased efficiency and reduced expenses.

However, smart contracts are still lagging behind their "legal" equivalents in terms of inclusiveness. Still, they execute quickly and leave no space for ambiguity or double interpretation when they are used. It is unlikely to eliminate attorneys' employment, but it can significantly decrease their workload for themselves and their clients. However, none of this will occur unless smart contracts are fully normalized and legally enforceable. Do you think the global governments will permit a transition of this kind to happen?