A Complete Guide to Ethereum 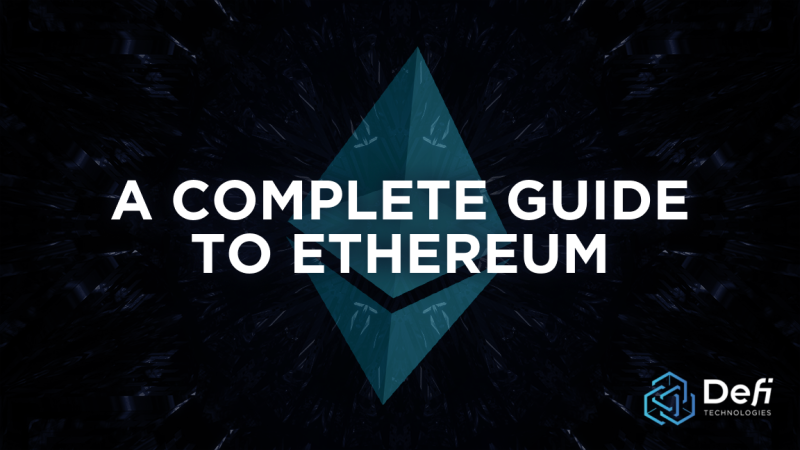 Ethereum is the second-biggest cryptocurrency by market capitalization, with even tipping it to overtake Bitcoin as a store of value. Ethereum also has the biggest and most vibrant community in the crypto ecosystem. These are just two of many reasons why understanding Ethereum and how it works is essential to understanding the blockchain industry as a whole. This article will cover the following aspects:

While most know Ethereum as a cryptocurrency, at its core, Ethereum is a decentralized computing platform. It consists of many single computers that power the Ethereum blockchain. That is why Ethereum has earned the title of being a “world supercomputer.” This blockchain is the infrastructure for a variety of decentralized apps (DApps) built on top of it. The Ethereum blockchain is permissionless, meaning anyone can create applications on it. It is also public, i.e., free to use and censorship-resistant, meaning no central authority can switch it on or off at a whim.

How does Ethereum work?

The Ethereum blockchain works as the underlying layer that developers build decentralized applications on. Similar to how Windows provides an operating system for computers, Ethereum provides an infrastructure for applications and software protocols.

To explain it in plain English, the blockchain is the record of everything that happened, and the virtual machine translates and executes the commands developers write in Ethereum’s programming language into a machine-readable format.

Decentralized applications and software protocols on Ethereum are built with smart contracts. Smart contracts are essentially deterministically executed software code. Like a vending machine executes a simple command, a smart contract does the same on a more complex level. Developers use smart contracts to build highly complex programs that resemble real-world infrastructure.

What are the use cases of Ethereum?

Smart contracts have been the cornerstone of Ethereum’s rise to popularity. With smart contracts, developers can code anything from a simple transaction between two people to a complex platform that millions use. Decentralized applications come in various shapes and forms: there are marketplaces, name services, music applications, prediction markets, and a lot more.

Smart contracts also allow for developing digital assets, which are coded on deployed on Ethereum according to specific standards. Following these token standards, anyone can launch their own tokens on Ethereum. These tokens become cryptocurrencies of their own; however, one should think of them less as currencies but more as digital tokens that perform a specific function on the platform they have been developed for.

NFT stands for non-fungible token, which is a specific subset of token standards on Ethereum. In contrast to other tokens, or fiat currency for that matter, NFTs are unique, non-interchangeable digital assets. For instance, a virtual trading card can be coded as NFT and have a trading value just as a scarce physical trading card would. Entirely new subsectors of the blockchain industry have sprung up due to the development of NFTs, such as digital art, digital trading cards, and NFT-based blockchain games. Even luxury brands are looking into NFTs and how they could serve their purposes.

Stablecoins are the cryptocurrency equivalents of fiat currencies such as the US-Dollar. They are another application of tokens coded according to token standards and part of a wider growth sector on Ethereum called decentralized finance (see next point). Stablecoins are pegged 1:1 to their real-world equivalents and serve as a hedge, safe haven, and an onramp for new cryptocurrency users into the ecosystem.

DeFi stands for decentralized finance and is an umbrella term for different financial applications and protocols developed on Ethereum to improve the current financial infrastructure. Decentralized finance has replicated many of the services that exist in traditional finance. There are lending protocols that allow users to borrow and lend money with crypto assets as securities. Decentralized exchanges are the decentralized counterparts of regular exchanges, where you can trade crypto assets without giving up custody of them. Margin trading and derivatives allow trading the value of cryptocurrencies. Insurance protocols insure users against cybercrime and smart contract risks.

How is Ethereum different from Bitcoin?

Ethereum adds blocks quicker to its blockchain. Bitcoin takes about 10 minutes to add a block to its blockchain, while the same process takes only 10 to 20 seconds on Ethereum. That results in Ethereum processing transactions more quickly than Bitcoin, although it is still nowhere near fast enough as a conventional payment system.

Bitcoin has a hard cap on its supply of 21 million coins. Ethereum currently has over 115 million coins in circulation with no hard cap. However, a planned future update will change the emission structure of new coins, which might cause Ethereum to become deflationary, i.e., for the supply of tokens to reduce instead of increase.

Ethereum is used for much more complex projects thanks to its more versatile programming language called Solidity. The sort of projects being built in decentralized finance would be challenging to replicate on the Bitcoin blockchain because of Bitcoin’s simplistic code. Hence, the two blockchains have distinct use cases. Bitcoin was intended as a store of value and payment system, while Ethereum was designed as a base layer for complex software projects.

The future of Ethereum?

With Ethereum becoming highly popular among blockchain developers, the blockchain has hit a roadblock on its growth path. There are more transactions than the blockchain can handle, which has led to excessive transaction fees and more calls for improving the underlying infrastructure to accommodate growing demand. Improving Ethereum’s scalability is the key obstacle to fulfilling its promise of becoming the base layer for decentralized Web 3.0.

Ethereum developers have set in motion a series of updates, which, once completed in 2022, will replace the current Ethereum with Ethereum 2.0. Part of it will be to replace the energy-intensive mining of new coins with a more energy-friendly alternative that should also significantly improve transaction speed and help scale the network.

Ethereum is possibly the most exciting project in the blockchain space because it has been a critical driver of innovation. Its popularity could also be its downfall, though. Other blockchains are working on improving on key weaknesses of the Ethereum blockchain, such as scalability while maintaining the flexibility of the original. Will Ethereum innovate fast enough to keep its first-mover advantage, or will a newer blockchain overtake it as the dominant base layer for decentralized applications?