A Guide to Blockchain Energy Consumption 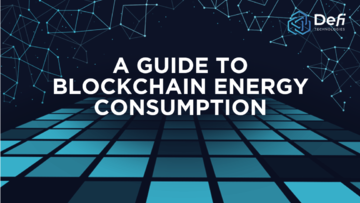 According to an article in Nature Climate Change 2018, adopting Bitcoin on a large scale would cause global temperatures to rise more than two degrees Celsius in the next three decades. Bitcoin’s environmental footprint is real, as is the criticism it constantly faces. However, some of that criticism doesn’t put Bitcoin’s energy consumption into perspective.

● The benefits of Bitcoin’s energy consumption

● The problems with Bitcoin’s proof-of-work

The benefits of Bitcoin’s energy consumption

Though often portrayed as a problem, the proof-of-work consensus mechanism Bitcoin uses is, first and foremost, an advantage. It provides the Bitcoin blockchain with a degree of security that is second to none. The more energy Bitcoin uses, the more secure the blockchain becomes since a 51% attack becomes more expensive. Like the hard forks of the original Bitcoin blockchain, smaller blockchains can and have been attacked in 51% attacks.

Moreover, Bitcoin uses an increasing amount of money on security, although the relative security expenses are decreasing. Miners are the ones who keep the blockchain secure, so their profits equal security expenses. But miner revenue doesn’t scale linearly with a rising Bitcoin price. In fact, the opposite is the case.

Bitcoin is an efficient network because adding the billionth user is less expensive than adding the first. This is due to declining block subsidies, which initially made up a big share of miner revenue but are being halved every four years. Consequently, it becomes relatively more difficult every four years to be a profitable miner, and a bigger share of your income is made up of transaction fees (because more people are using Bitcoin). If Bitcoin reached a moonshot valuation of $1 million, it would likely be critically important for billions of people and replace energy usage of other networks. In that case, even energy expenses of hundreds of billions annually would be justified.

Lastly, Bitcoin mining often uses otherwise inefficient energy resources. For example, many Bitcoin miners in China are using excess hydro energy in the province of Sichuan during the wet season. This energy would otherwise simply go to waste. A similar case is flared gas, natural gas associated with petroleum deposits that get vented or flared, that is released into the atmosphere or burned. Instead, Bitcoin miners buy this excess energy and put a price on the negative external effects for the environment. Furthermore, governments with a surplus of green energy, Iceland and its geothermal energy comes to mind, benefit massively from Bitcoin miners buying the otherwise unexportable energy.

The problems with Bitcoin’s proof-of-work

Consuming a lot of electricity wouldn’t be a problem if it came from renewable energy sources only. However, here is where things start to get complicated regarding Bitcoin’s electricity consumption.

Even though three out of four Bitcoin miners use renewable energy sources, about 61% of the energy used to mine Bitcoin comes from non-renewables. Since a miner will set up their rig where electricity is cheapest, they are likely to do so in second and third-world countries whose electricity comes from fossil fuels.

More than half of Bitcoin’s hash rate is located in China and runs on hydro-energy in the summer and coal in the winter. Although China has been cracking down on miners recently to push down its carbon emissions, plenty of Chinese Bitcoin miners still exist. Those who did move went to other countries with cheap fossil fuels, such as Kazakhstan. Bitcoin’s carbon footprint amounts to 70 to 90 million metric tons of CO² - as much as Israel or Belgium.

Bitcoin mining is a cut-throat business, so mining rigs need to be renewed since the ASIC processors used to mine coins are outdated every 18 months. This results in an enormous amount of e-waste, about as much as Luxemburg produces every year (6.76 kilotonnes).

For instance, gold, which Bitcoin is often compared to, doesn’t rely on gold mines to function. Mines can stop operating, and the circulating supply of gold can still be used. The same is not true for Bitcoin, which still requires proof-of-work for validating transactions.

Proof-of-stake blockchains require a fraction of the energy proof-of-work blockchains need. Electricity consumption could be cut by as much as using proof-of-stake. The problem is that Bitcoin was the first blockchain that solved trustless peer-to-peer payments, giving it a massive first-mover advantage in terms of trust. Bitcoin has a very limited use case, but one that is tried and tested. This first-mover has led to a certain “but Bitcoin!” dynamic in the crypto space, where new and economically more efficient blockchains are doubted based on not having been around as long as Bitcoin.

Second, in a world where Bitcoin is less popular, it also consumes less energy, indicating it wasn’t designed with many users in mind. Bitcoin purists also (wrongly) point out that proof-of-stake erects entry barriers by having minimum stake requirements while mining is open to everyone. This may have been the case in Bitcoin’s infancy, but not today.

Scaling solutions will and already are bringing down the energy consumption of blockchains outside of Bitcoin and Ethereum. Pretty much no new blockchain launches with proof-of-work because its environmental impact is well-known. If Ethereum switches as it is planning to, this would only leave Bitcoin as a major “dirty” blockchain (although it is also the biggest one overall).

Though technology can and will help, Bitcoin is there to stay, and its electricity consumption is rising inevitably. At some point, policymakers will likely start targeting and singling out Bitcoin for its environmental footprint, as China is already doing today. On the other hand, Bitcoin is also a business that countries can benefit from, as the example of Iceland’s geothermal energy industry shows. Countries have an incentive to push down renewable energy prices to attract an ever-growing group of miners to set up shop and start mining Bitcoin. Countries might also try to impose some sort of carbon tax on miners to put a price on the socialized costs of the industry.

The problem might also simply go away in the form of a technological breakthrough that pushes down energy prices for renewables or at least constant improvements in the efficiency of processors and electricity allocation. This could lead to miners being more distributed, which would be healthy for the Bitcoin blockchain itself. One also cannot exclude the possibility of another blockchain simply overtaking Bitcoin and sucking out liquidity from it to make mining unprofitable.

Currently, the environmental impact of blockchains is significant, but this is not bound to stay that way forever. Moreover, Bitcoin has proven to be an efficient way of balancing demand and supply in energy markets. Is the narrative that Bitcoin is a “dirty blockchain” going to prevail, or will environmental lobby groups come around to Bitcoin’s undisputable network efficiency?