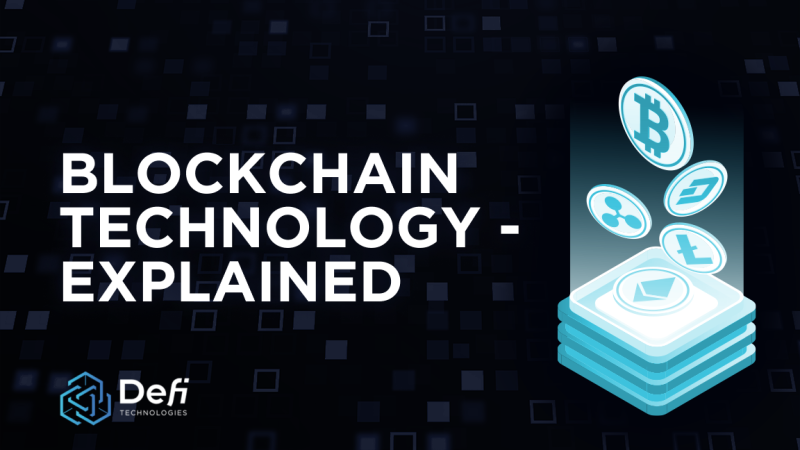 Blockchain is arguably the most disruptive technology the world has seen since the creation of the internet. As you may already know, blockchain plays an integral role in the workings of almost every single popular cryptocurrency that we see in the market. Unfortunately, most of the population believes that the use cases of this technology are confined to cryptos - and they couldn’t be more wrong. Blockchain technology is already in the process of transforming trillion-dollar industries such as the banking sector, health care, supply chain, and more.

As per , the enterprise blockchain revenue is projected to surpass $20 billion in less than four years. Also, the global blockchain market size is projected to grow from USD 4.9 billion in 2021 to USD 67.4 billion by 2026 - a compound annual growth rate of . So, what even is this technology? Why is it poised for such exponential growth? Let’s find out.

Blockchain is a special type of digital database. While there's nothing new about digital databases, what makes blockchain unique is that, if we combine it with a couple of other technologies, we get an incredibly secure, transparent, and immutable database. Anyone can view every piece of data in the blockchain; however, there are rules on how data can be added to a blockchain. These rules ensure that no one can alter the records on the blockchain, or add falsified data to it.

How Does Blockchain Work?

Although cryptocurrencies popularized blockchain technology, the technology itself can be used for just about anything. Technically, a blockchain is a distributed ledger with a block-like structure. Being distributed means that its contents are not stored in one place, but rather on numerous devices.

This validation and verification is done using numerous consensus methods, which vary depending on the project. Note that the validators are independent of each other and are not working in concert. It is virtually impossible to change the blockchain unnoticed.

When a new transaction occurs, it is broadcasted throughout the network, and the validators are tasked with verifying the legitimacy of this transaction. If they agree that the transaction is verified, it is added to a block.

A block is a group of transactions recorded chronologically. Each block carries its unique identification number, called a hash. This identification number consists of a long series of numbers, letters, and special characters. Each hash is unique as a fingerprint, and therefore it is considered just as reliable in identification as the fingerprint in humans. As soon as a hash is created, its hash is also calculated immediately.

Why is Blockchain Secure?

Let's take an example of a hypothetical blockchain that only has three blocks. Each of these blocks contains a record, a hash, and the hash of the previous block. This means that block #3 always refers to block #2 because they have the same number series. It is how the blocks are connected.

However, there must be an initial block somewhere that does not carry the hash of its predecessor but represents the first block of the chain. This block is called the Genesis block. Should someone change the second block from the three-part blockchain, this will immediately invalidate block #3 and all subsequent blocks. However, the use of hashes does not make blockchain technology so unassailable; that is why every blockchain has a consensus algorithm.

The validators are essentially what gives the blockchain its core characteristics, which we will look at next.

As we have mentioned, the blockchain consists of a network of computers worldwide. That means that no single person or a group working in concert can control the system. Each of these network nodes can check whether a blockchain is still in the correct state. When a new block is created, this new block is sent simultaneously to all participants of this network. Then each of these network nodes verifies the new block so that it can be sure that this block has not been tampered with by anyone before. If the block is classified as clean and correct, it will be immediately inserted into the blockchain.

One of the most discussed features of the blockchain is the anonymity of its participants. While any accesses and activities of the participants can be traced transparently, the participants themselves are only represented by a cryptographically encrypted series of numbers. Depending on the type of blockchain, it is very difficult or sometimes unable to understand which real identity a participant is.

However, once a person is tied to a certain blockchain transaction, we can learn everything about them, including their current holdings, previous transactions, and more. This is why blockchain (in its natural state) ensures pseudonymity rather than full anonymity.

The combination of distributed technology, immutability, and transparency makes blockchain the perfect fraud-proof ledger. It contains the complete history of information that has ever occurred within the system, while new data is stored and updated simultaneously across the network. The more participants a blockchain has, the more secure it is.

The potential of blockchain technology can be seen more and more through a new generation of product solutions that base their user experience on markers such as transparency, security, and immutability of data. It is the ultimate technology whose application spans every aspect of our daily lives.

Which industry do you think blockchain will impact the most in the next five years? Let us know.