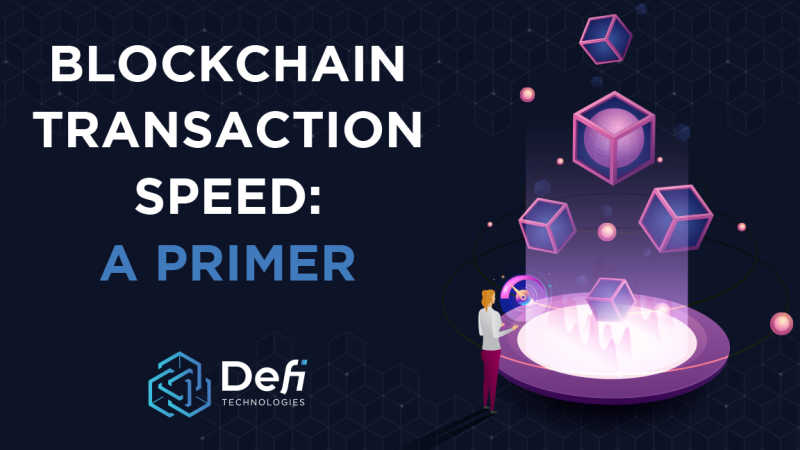 Blockchains meet with resistance when it comes to transaction speed. While the technology has its merits, it cannot keep up with centralized payment processors, as this example shows. Outright dismissing blockchains due to their current scalability issues might be a bit short-sighted. This article explores:

● The importance of blockchain speed

● How to determine how fast a blockchain is

Fundamental to blockchain speed is understanding the blockchain trilemma, a concept by

Examples of trade-offs would be:

The importance of blockchain speed

● 0.1 seconds: the limit when the interaction feels instantaneous and without delay.

● 1 second: the limit when you notice a delay, but your flow isn't interrupted.

● 10 seconds: the limit of keeping the user's attention. If the delay is longer, you will start another task in the meantime.

This matters because the third limit is the key figure to watch when processing payments. Current technology is operating within the third limit, i.e., you pay by card, and there is a delay, but it is not too long to be annoying or inefficient to use on a broader scale. Therefore, blockchains must stay within the same limit and possibly be even faster to usurp incumbents. So far, no blockchain has found the "winning formula". Besides, blockchains will likely have to be faster than the 40,000 transactions per second benchmark currently set by credit card companies, so it's worth looking into how blockchain speed is determined.

How to determine blockchain speed

● The size of each block

● The block time (how frequently blocks are mined/validated)

● The average transaction size on the blockchain

Take Bitcoin as an example: it has a block size of one megabyte, and its block time is ten minutes. The average transaction size is 400 bytes. Approximating the transaction speed yields:

One block is made every ten minutes (=600 seconds).

This is reasonably close to its actual speed of about five tx/sec. Increasing transaction speed would require an increase in block size, a decrease in block time, or both. Assuming Bitcoin's block size was ten times bigger and its block time ten times faster yields the following results:

Unsurprisingly, Bitcoin would be a hundred times faster than now but still much slower than Visa cards. Regardless, both of these solutions would not be possible. Reducing block times would increase the risk of unvalidated, so-called orphan blocks, weakening a chain's security and increasing the likelihood of hacks. Increasing the block size would balloon the size of the blockchain itself, currently around 350 gigabytes for Bitcoin. That would lead to problems of data storage, i.e., a much bigger blockchain could not be stored by the average user, thereby taking away the possibility for everyone to participate as a node, a key appeal of Bitcoin. Storing the blockchain would require data centers, resulting in centralization by necessity. Also, internet speeds would need to be up to par to upload transactions. For instance, 400-500 transactions per second would require 10 megabytes per second in upload speed to function correctly.

Inevitably, a blockchain's speed is a function of its scalability, and since it cannot be compromised, it leaves developers with a trade-off between two possible options.

Most established and new-generation blockchains are taking this approach. The more nodes there are, the slower a blockchain becomes, and the more transactions these nodes have to validate, the more the problem compounds. Thus, it is tempting to reduce the number of nodes to increase speed.

This is what layer two solutions for Ethereum, such as Polygon, have been doing. Only 7-10 nodes produce blocks. The same is true for competing blockchains like Polkadot, whose smart contracts will be validated by 10 validators.

Moreover, transactions get executed, but they also need to get confirmed. Bitcoin transactions have an execution time of ten minutes, but the transaction takes longer because of the confirmation time, i.e., blocks added after the block containing the transaction. Less secure blockchains like Ethereum Classic can require as many as 40,000 confirmations, taking a week to process a transaction. In contrast, centralized blockchains like Ripple, Stellar, and Cosmos offer instant transaction finality and are faster. They are centralized, though, as would be a central bank digital currency.

There are fast blockchains with low transaction times that are somewhat decentralized: Binance Smart Chain and Solana come to mind. The latter can process up to 65,000 tx/sec and is tipped to become the solution for blockchain games. However, these advantages don't come without a few downsides.

BSC had to deal with no less than six hacks in May 2021 alone. Solana has been the more stable option of the two, but that might only be due to having much less total value locked than Binance Smart Chain. Still, it had to deal with an outage in December 2020 that lasted for about six hours, something unheard of for Bitcoin or Ethereum.

Moreover, precisely Solana has a small transaction size per block, resulting in a rapidly growing blockchain. The Solana blockchain has grown to over two terabytes in a little over a year of existence. Solana reacted by outsourcing its data storage to a decentralized cryptocurrency storage project called Arweave and its validators only the last two days of data.

Credit card companies were not lightning fast out of the blocks, so judging blockchain technology too harshly at this early stage of their development would be unfair. Besides already existing solutions, Ethereum is working on its own scaling solution called Ethereum 2.0 that would increase its tx/sec to up to 100,000. Even Ethereum will have to compromise on some of its decentralization, installing 128 validators that change randomly. Cardano is another project with a promising solution that has not yet been stress-tested. Will blockchains be able to scale to become a viable alternative to current payment solutions and, if so, when?