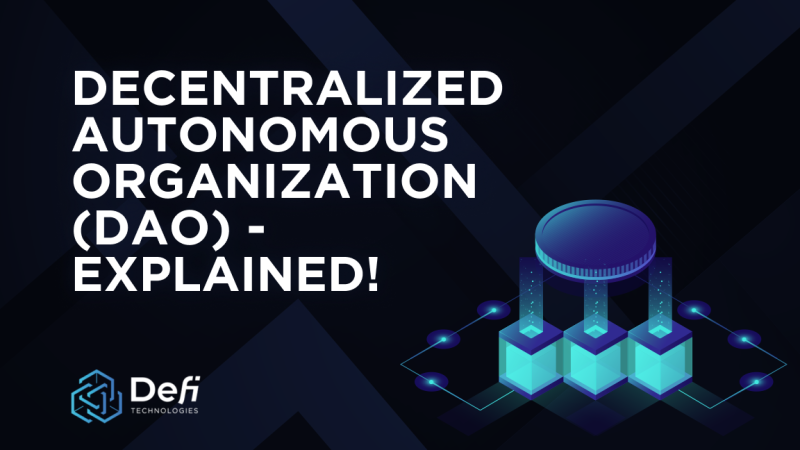 If you could change anything about your last place of work, what would you change? Leadership? Structure? Payment structure? What if there is an organization that handles all of these segments autonomously and with no central authority? What if you could be a part of that organization’s governance? Sounds interesting? Let’s discuss!

What if there’s already a structure where everyone is a leader, and which is operated by an immutable system of knowing the outcome of decision making? This is where the Decentralized Autonomous Organizations gain their relevance.

Understanding the concept of DAO

A Decentralized Autonomous Organization (DAO) helps eradicate a problem present in many conventional organizations - the . When more than one person is involved in an organization, there is bound to be some divergence of interest, priorities, and goals. This leads to parties making selfish choices. DAOs avoid this problem by creating a trustless system and removing the need for centralized leadership.

A DAO is, just as its name says, a decentralized autonomous organization, with its core features being:

The first application of DAOs was created in early 2016 when a few crypto enthusiasts decided to create an open-source framework on the Ethereum Blockchain. Named "The DAO," it was an investor-directed venture capital fund. Please do not confuse this with the actual term DAO. This company garnered the most prominent crowdfunding ever with an estimated $250 million worth of Ether when Ether was still trading at $20.

This huge success was short-lived as an exploit in The DAO’s system left the site reeling from a loss of 3.6 million ETH in mid-2016. Later that year, many exchanges delisted The DAO token, leaving the project battered. Ever since then, several attempts have been made to run enterprises using the decentralized autonomous organization method. Many of them have been successful, as we will see later in the article.

How Does a DAO Work?

Any DAO's efficiency depends on three fundamental things - the smart contracts involved, the set of rules known to all members, and a token that can be spent within the system for rewards. The smart contract holds all the information of the DAO, ranging from who the majority stakeholders are, the workflow, and incentive systems. Defining and encoding the smart contract is the essential part of a DAO as editing or reviewing it would need to include the votes from every member of the decentralized organization.

After the smart contract has been encoded, there is the need for a token as it plays a crucial role in allocating the voting rights and offering incentives to certain organization members. The holders of these tokens invariably are entitled to voting rights based on their holdings.

Notable Advantages and Disadvantages of Using a DAO

Examples and Use Cases

The transitioning of most cryptocurrency exchanges from centralization to decentralization is not as smooth as it seems on paper. DAOs are still a new concept and will evolve with time. Let's look at two notable examples of blockchain projects that run very close to a fully decentralized system.

MolochDAO: is an organization focused on financing new Ethereum projects. Before you can join, you will need to submit a proposal that the organization members will go through and deliberate if you'd be a good fit in expertise and capital to make sound judgments on upcoming Ethereum-based projects. MolochDAO is still one of the closest organizations to operate on a fully decentralized and autonomous system.

Dash: Some argue that Bitcoin was the first DAO to exist. While it operates on a decentralized network, Bitcoin is nowhere near a DAO by today's standards. is a cryptocurrency company that comes close to being a DAO as its members come together to deliberate on how the treasury would be managed.

Why are DAOs the Future of Governance?

The question of which organizations would turn into DAOs in the coming years is very valid. The stereotypical centralized organizations and projects have brought more flaws than imagined. A few of them are mentioned below.

Because of these reasons and many more, the chasm for a decentralized, all-inclusive, and trustable system has gotten more comprehensive than could have been imagined before. The success achieved by the decentralized nature of Bitcoin can only mean one thing; DAOs are here to stay and will become the norm in coming years.

The concept of DAOs is still relatively new, and a lot of work still has to be done, especially concerning legal and regulatory compliance. Nonetheless, since DAOs help removes the principal-agent dilemma, it is only a matter of time before many centralized organizations (most importantly, centralized crypto exchanges) start redefining their values to be decentralized autonomous exchanges.

Which company, exchange, or cryptocurrency project would you want to see taking the lead? Let us know, as we would love to know your thoughts!