Understanding DeFi | How is it Different From the Centralized Finance That We Use Today? 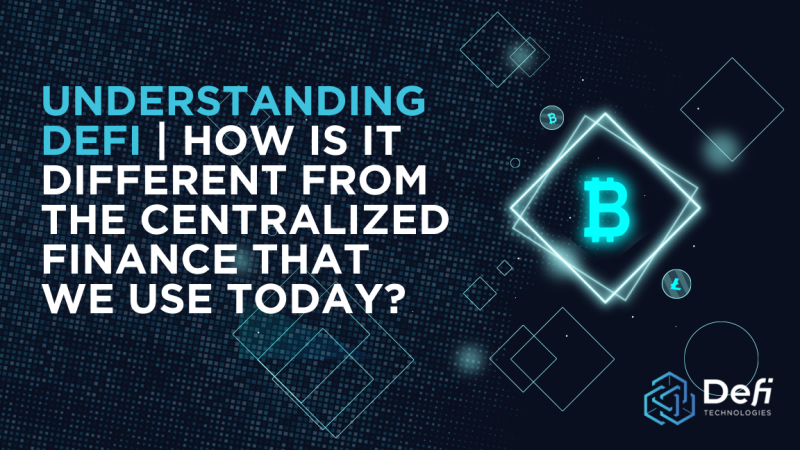 What Exactly is DeFi?

Smart contracts enable the execution of trusted transactions and agreements between different, pseudo-anonymous parties. There is no need for central authorities of a legal system or an external enforcement mechanism. They make all transactions traceable, transparent, and irreversible. There is no central office, but the network and its participants verify the transactions based on the smart contract.

dApps are all applications built on distributed ledger technology. In the broadest sense, every cryptocurrency is a dApp. Unlike conventional apps, such as the instant messenger WhatsApp, dApps are not operated, maintained, or further developed by a single provider. If WhatsApp were a DApp, it wouldn't be run by Facebook alone. Facebook can alter WhatsApp's software anytime it wants, anyway it wants. But for a dApp, this wouldn't be possible.

The term dApp covers a wide range of applications. Nevertheless, an application must meet certain criteria to earn the designation.

dApp is comparatively easy to create and can be programmed as desired. The developers can fall back on different functions and thus publish an individual result. Once implemented on the blockchain, a DApp is independent and decentralized. These dApps run on smart contracts.

How is DeFi different from CeFi?

Established financial institutions have also recognized the potential of blockchain technology and are offering their own products. Here's why.

Open loans are a term from the banking sector. Open credit protocols refer specifically to the area of decentralized financial transactions. The complete credit protocol is an electronic credit template that serves as an evaluation basis for the decision-makers.

Secured lending now encompasses an entire ecosystem in which numerous advantages over traditional credit structures speak for themselves. The high functionality of smart contracts is only one point. They achieve the minimization of trust between business partners and, in most cases, are based on Ethereum.

Decentralized credit protocols are based entirely on the public structure of blockchains and convince by:

Most investors especially see the potential to earn passive income by borrowing and lending cryptocurrencies. There are different possibilities, which also entail different risks.

This is also a form of investment, which is why certain basic rules must be observed. For example, fundamental analysis of cryptocurrencies can help you find a solid project. Technical analysis and sentiment analysis can be used to determine whether it is a suitable time for an investment.

Through DeFi, investors have the opportunity to participate in the platform and generate profits through:

Staking cryptocurrencies has established itself as a popular form of generating passive income. However, not all tokens offer this form; in addition, there is still the risk of price losses. Holders of certain tokens can deposit the respective currency, which is then deposited in a smart contract. Often this process is used to secure a specific blockchain. In return, the lenders receive a fixed interest rate of the respective cryptocurrency.

The simplest but also least profitable option for yield farming is to lend cryptocurrencies on DeFi platforms. The interest earned for this is paid by those who borrow cryptocurrencies (for example, to bet on falling prices 'shorten'). Different platforms have different interest rates that are also variable. Getting the best out of these interest rates is called yield farming.

Decentralized exchanges have developed, which are based entirely on smart contracts. The trade takes place automatically, and there is no company behind the project. In addition, different tokens can be exchanged directly with each other, which makes trading faster and less complicated. Previously, a change into the key currencies Bitcoin or Ethereum often had to take place.

Since trading is based on token swaps, there is also no order book. Rather, each currency has a specific deposit, which serves as liquidity. This deposit often comes from investors or from the project itself to enable trading with the token. For providing liquidity on a DEX, the lenders then receive remuneration.

On centralized exchanges such as Uniswap, users can act as market makers and provide liquidity to a pool so that the exchange of cryptocurrencies takes place without large price fluctuations (slippage). For this service, "Yield Farmers" are rewarded with different fees, depending on the trading pair.

Liquidity mining refers to the process of providing coins in a DeFi pool, which is rewarded by the issuance of new tokens. Liquidity can be, for example:

Liquidity mining incentivizes the use of mostly new platforms with a new token to attract new users.

Notably, DeFi has made huge strides these past few years; DeFi can handle every aspect of the centralized financial system, and the biggest win for DeFi is that it's cost-effective. CeFi processes are usually very cost-intensive and time-consuming, not to mention the bureaucracy. DeFi employs dApps and smart contracts, eliminating the bottlenecks of CeFi. It has excelled at being the bank for the unbanked since no stringent KYC policies are required – which tend to lock out several would-be borrowers. Most notably, DeFi offers several lucrative passive income-earning opportunities, including staking, yield farming, and liquidity mining.

Many have argued that the only clear path forward for DeFi and CeFi is to commingle, bringing the gaps between the two worlds. What's your opinion? Do you think DeFi will replace the traditional financial system?