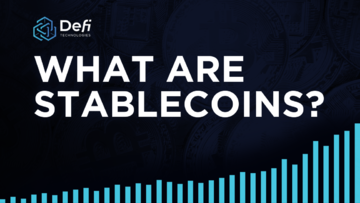 The growth of stablecoins in the last few years has been explosive enough to . In their opinion, stablecoins have become big enough to potentially threaten the stability of the US financial system. At a as of July 2021, stablecoins as a whole have the 3rd-biggest market cap after Bitcoin and Ethereum. This guide will give you a high-level overview of everything you need to know about stablecoins. You will learn:

Stablecoins are cryptocurrencies designed to be the equivalent of real-world fiat currencies like dollars or euros. They are pegged in value to their real-world counterparts and are exchangeable at a 1:1 rate.

This type is backed by the equivalent value in fiat currency to maintain its value. In theory, there should always be the same amount of dollars or dollar equivalents securing the value of the issued stablecoins. All coin holders can at all times redeem their stablecoins for US-Dollar. While this is a straightforward mechanism, it also opens up the stablecoin to a degree of counterparty risk. Holders essentially trust the issuing party to have the reserves on hand. Even though the issuing companies do face security audits, regulation is not as stringent as for traditional financial institutions.

There are stablecoins backed cryptocurrency assets as security. Unlike with fiat-backed stablecoins, smart contracts, as opposed to humans, handle the issuance of new coins. This minimizes counterparty risk, but it comes at the expense of the coin being capital-inefficient. Since the underlying cryptocurrency collateral is often quite volatile, these stablecoins need to be overcollateralized to maintain their peg while balancing the price swings.

In contrast to their secured counterparts, algorithmic stablecoins do not have an underlying reserve asset. They maintain their peg solely through an algorithm that monitors the supply of stablecoins in the market and the supply is increased and reduced accordingly. This is very much the way central banks operate in the real world. However, algorithmic are still in their experimental phase and not as widespread as stablecoins backed by crypto or fiat assets.

How do stablecoins work?

Stablecoins are issued either by central entities, in the case of fiat-backed coins, or by smart contracts governed by their communities, as is the case for crypto-backed coins. You can exchange these stablecoins for real dollars at any cryptocurrency exchange.

Despite being remarkably stable, there are a few scenarios in which stablecoins can slightly deviate from their dollar peg. If a coin falls below its peg, you could only get $0.98 for every dollar worth of stablecoin. That might happen if trading liquidity was poor or there were concerns regarding the underlying collateral. With market capitalizations rising, the former isn’t much of an issue, although stablecoins can briefly de-peg during times of high market volatility. The latter has been a problem for the stablecoin Tether in the past.

A coin can also trade at a premium, i.e., you get 1,02 units of stablecoin for every dollar. This might happen if investors rush into safe assets during a price crash.

If prices deviate, arbitrageurs will capitalize on the opportunity to restore the peg. They would buy stablecoins if those are trading at a discount and sell them if they are trading at a premium. For this reason, de-pegs are rare and short-lived.

What are the use cases of stablecoins?

Stablecoins are an easy way to get into crypto without exposing yourself to the volatility and currency risk of Bitcoin and Ethereum. For example, VISA has , the second-biggest stablecoin on the market. Many also see stablecoins as banking without the regulation and hassle that comes with traditional banks.

Many bigger investors use stablecoins as a safe haven in times of increased market volatility or during downturns. Selling traditional crypto assets for stablecoin is vastly more efficient and quicker than taking liquidity out of the crypto ecosystem altogether.

Stablecoins have also played a major role in fueling the rise of the DeFi space on Ethereum. Not only were they among the first innovations to emerge from this subsector, but stablecoins were also integral to the growth of many other projects. The use cases of many DeFi applications rely on stablecoins as liquidity to function correctly. Thus, why these two grow hand in hand.

What kind of different stablecoins exist?

Tether is the biggest stablecoin by market cap. It was founded in 2014 by a group of people that were also intertwined with the management of Bitfinex, one of the biggest crypto exchanges in the world. Despite Tether’s growth in recent years, it has repeatedly been the subject of speculation and targeted by prosecutors. Tether has been accused of illegally propping up the price of Bitcoin, as well as not maintaining as many reserves as it claims. In 2021, the latter accusation was settled in court with Tether having to pay an $18.5 million fine.

US Dollar coin is the second by market cap and was founded in 2018 by Circle, a payments company, and Coinbase, a cryptocurrency exchange. Unlike Tether, it has not faced any headwinds and has been steadily making up ground.

BUSD is a fiat-backed stablecoin backed by Binance, a cryptocurrency exchange, and Paxos, a blockchain company that provides other stablecoins. US regulatory authorities have approved BUSD and its fiat reserves are subject to regular audits.

DAI is a crypto asset-backed stablecoin by the MakerDAO Foundation, a cryptocurrency project that set out to create a decentralized stablecoin. Unlike its counterparts, it is 100% based on cryptocurrency collateral, in large parts ETH and USDC. Despite having problems maintaining its peg in times of significant market volatility in March 2020, DAI established itself as a viable stablecoin alternative.

Stablecoins are a useful addition to the crypto ecosystem as a whole, as they provide an essential service by contributing to market stability and smoothing investors’ trading experiences. One shouldn’t overlook the remarkable growth and partially murky financial situation of the companies behind these coins, though. You cannot help but ask: is the rise of stablecoins a danger to the financial system as a whole, and should central banks step in?